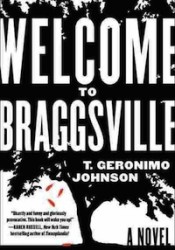 T. Geronimo Johnson’s first novel Hold It Til It Hurts is one of the best books I’ve read recently. It’s a visceral, somber tale of two brothers returning from military service in Afghanistan only to find more Afghanistans in their family secrets and the bombed-out ghettos of Atlanta and New Orleans. The prose is disciplined and precise, and by the time the climax swirled in the eye of Hurricane Katrina, there was no doubt in my mind that Hold It Til It Hurts is the definitive novel of the African-American male experience during the Bush years. I’ll be thinking about sentences like this one for a long time:

There were the morbidly inquisitive, people who thought they could comprehend, secondhand, if they could understand how often the dead appear to be grinning, or that if you stare too long a dead friend looks more and more like a stranger, while a dead stranger looks increasingly like a long-lost friend.

Unfortunately, Johnson’s follow-up Welcome to Braggsville is the shaggy, far less accomplished younger brother of his first book, a coming-of-age tragi-farce that never finds cohesion between the genres it tries to blend. Simultaneously undercooked and overstuffed, the purported Southern-fried comedy fails to clear its lowest hurdle: it’s just not funny enough.

Read more at The Rumpus