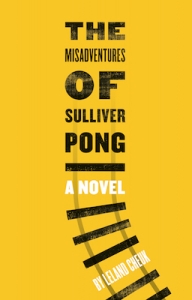 My first novel THE MISADVENTURES OF SULLIVER PONG is en-route. I’ve always been a fan of charming scoundrels in books and film. This novel is a Bad Santa about Asian-American dudes.

The Pongs are an American immigrant family that has seen it all. They helped build the transcontinental railroads of the Victorian Age. They were mistakenly interned with Japanese-Americans during World War II. They may even have co-invented the landmark video game that bears the family’s last name. But despite all they’ve endured, each new generation’s patriarch has had one thing in common: a penchant for degeneracy. Sulliver Pong was supposed to be the exception.