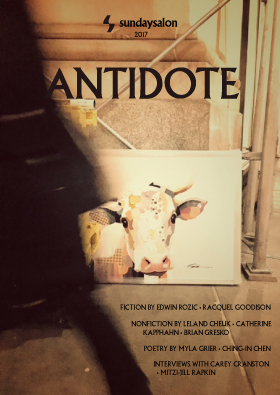 My essay “A Grandfather’s Guide to the Resistance” is up at SalonZine, Sunday Salon’s lit journal.

I do not regret making such political choices at that time, because political struggles are practical; the misconducts were not faults of individuals, but necessities in the revolution of history. In fact, no one could foresee to what extent power could deteriorate individuals and the political party in charge. This was the heavy price that we had to pay in the progression of civilization. What truly mattered, after all, was the awakening of the people.

—Guo Wan Check, from his memoirs. He is the author of over twenty Chinese books and best known for his book of essays entitled Opening the Window to America published in 1984. He also happens to be my grandfather. The translation is courtesy of Muyun Zhou.

A Grandfather’s Guide to the Resistance

Almost all of my childhood memories of my grandfather involve him sitting at the dining table, either penning Chinese characters on gridded paper or pasting news clippings onto the fleshy, airbrushed pages of Playboy. (My uncle, my cousin and I would eventually discover, was the loyal subscriber). The clippings were reference materials for my grandfather’s political essays.

He and my grandmother immigrated to the U.S. in 1980, and they were instrumental in raising us (my two cousins and my brother) while our parents worked. My grandfather wasn’t terribly attentive as a caretaker; he was very preoccupied with his writing. But he was a gentle man, who smiled easily and was never a disciplinarian. He specialized in political op-eds, though he had once aspired to write what he considered the highest form of literature: fiction.

But politics got in the way. Born in 1925, he came of age during a period in Chinese history that was more turbulent that any American can imagine. There was the Chinese Civil War between the Communists and the Nationalists who eventually colonized Taiwan. Then there was the Second Sino-Japanese War, during which the Japanese army came through my grandfather’s hometown of Wuzhou, forced his high school to move into the mountains, and burned down the hotel his father owned. Then came the second part of the Chinese Civil War, which ended in 1950 only to be followed by the Korean War (known to the Chinese as “The War to Resist U.S. Aggression and Aid Korea”). There was the Anti-Rightist Movement of the late fifties, followed by the famine caused by Mao’s disastrous collectivization campaign called the Great Leap Forward, which preceded the purges of the Cultural Revolution of the sixties and seventies. Exactly zero of the first fifty years of my grandfather’s life were not buffeted by the harshest rails of politics.

Read the rest of the essay here.